Back to Top
5 Pearls Podcast 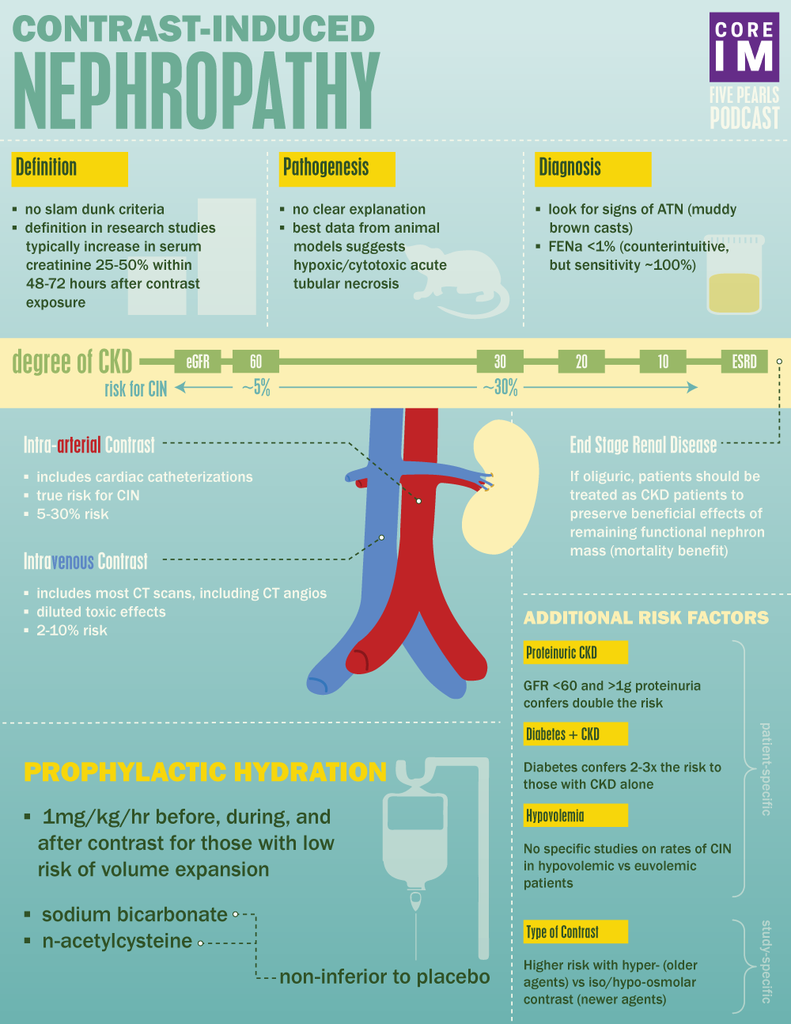 Quiz yourself on the 5 Pearls we will be covering!

What are the diagnostic criteria for Contrast-Induced Nephropathy (CIN)?
Trick question! There is no guideline-based diagnostic criteria for CIN. There is no diagnostic lab, imaging or biopsy finding diagnostic of CIN. CIN has been defined for research purposes as a rise in Cr by at least 25% within 48-72 hours after contrast and exclusion of other likely causes of AKI.
What is the proposed mechanism for contrast-induced nephropathy?
Animal models suggest that the strongest element of CIN is from hypoxic and cytotoxic ATN (acute tubular necrosis)
What lab findings might you expect in a patient with CIN?
1. Rising Cr 2. Urine microscopy with muddy brown casts and a FENa <1 (in the literature the average FENa in CIN is quite low, around 0.3-0.7). NOTE: you may be surprised CIN is correlated with a low FENa. CIN is thought to damage the kidneys via an ATN-like mechanism, which is associated with a FENa >1.
Does the risk for CIN change depending on how the contrast is delivered?
Most data suggest that CIN is a disease almost entirely seen with intra-arterial contrast loads. This is after accounting for numerous confounders (i.e. differences in severity of illness, volume of contrast used, rate of complications such as plaque emboli, study type and selection bias).
There is evidence to support that intravenous contrast does not cause CIN. In very broad strokes, what does the evidence show?
Studies compared patients undergoing contrast vs. non-contrast intravenous studies and found no differences in: 1. The development of CIN; 2. Need for eventual HD; 3. Mortality. This remained true after stratifying by traditional CIN risk factors (chronic kidney disease, diabetes, and heart failure).
The risk of CIN in intra-arterial studies varies depending on other risk factors. What are they? (Hint: think about both the patient and the contrast agent!)
PATIENT CHARACTERISTICS: 1) CKD with or without proteinuria (with proteinuria a greater risk factor) 2) Diabetes 3) Hypovolemia CONTRAST CHARACTERISTICS: 1) Greater volume and 2) High osmolarity formulations (now uncommon)
How does diabetes alter the risk of CIN?
Works synergistically with CKD to raise risk of developing CIN. People with diabetes and CKD demonstrated almost triple the rate of CIN compared to patients with CKD alone.
What is an easy way to estimate risk of CIN in patients undegoing intra-arterial contrast?
By GFR and proteinuria!  GFR 30-60: about 5% risk of CIN. GFR less than 30: about 30% risk of CIN. Protienuria greatly increases risk! For example, GFR < 60 and > 1 g of proteinuria equates to double the risk of CIN versus those with GFR < 60 and < 1 g proteinuria.
What preventive measures have been shown to reduce the risk of CIN?
Achieve euvolemia – ideally via 1mL/kg/hr of prophylactic hydration 12 hours before/during/after intra-arterial contrast. Caveat: data to support IV fluids prior to intra-artieral contrast varies.
What fluid should be used to prophylactically hydrate and reduce the risk of CIN?
Chose either NaHC03 or NS (no difference in outcomes). Note: do not give NAC – no better than placebo!
Attempts to prevent CIN are important in which patients with end stage kidney disease (ESKD)?
Patients with ESKD who still make urine. Why? They still have residual nephron function that could be threatened/compromised by development of CIN! Residual nephron function has importance clinical benefits (some filtration of uremic toxins, volume removal and survival benefit).
You have a patient with ESKD on HD who is scheduled to undergo cardiac catheterization. She is oliguric. Should you give her prophylactic IV fluids?
Yes, however there is limited data to support this practice. Because the patient can tolerate volume expansion, best practice is likely to give IV fluids.