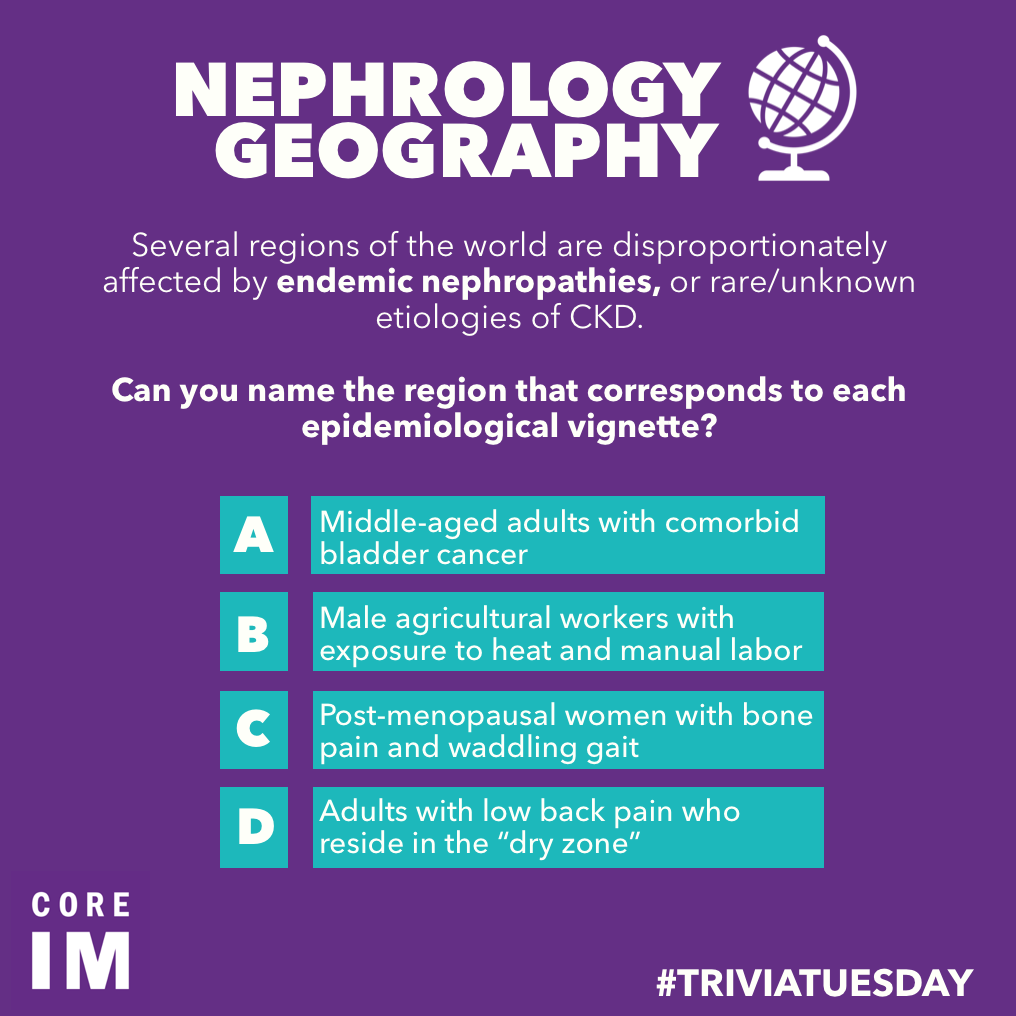 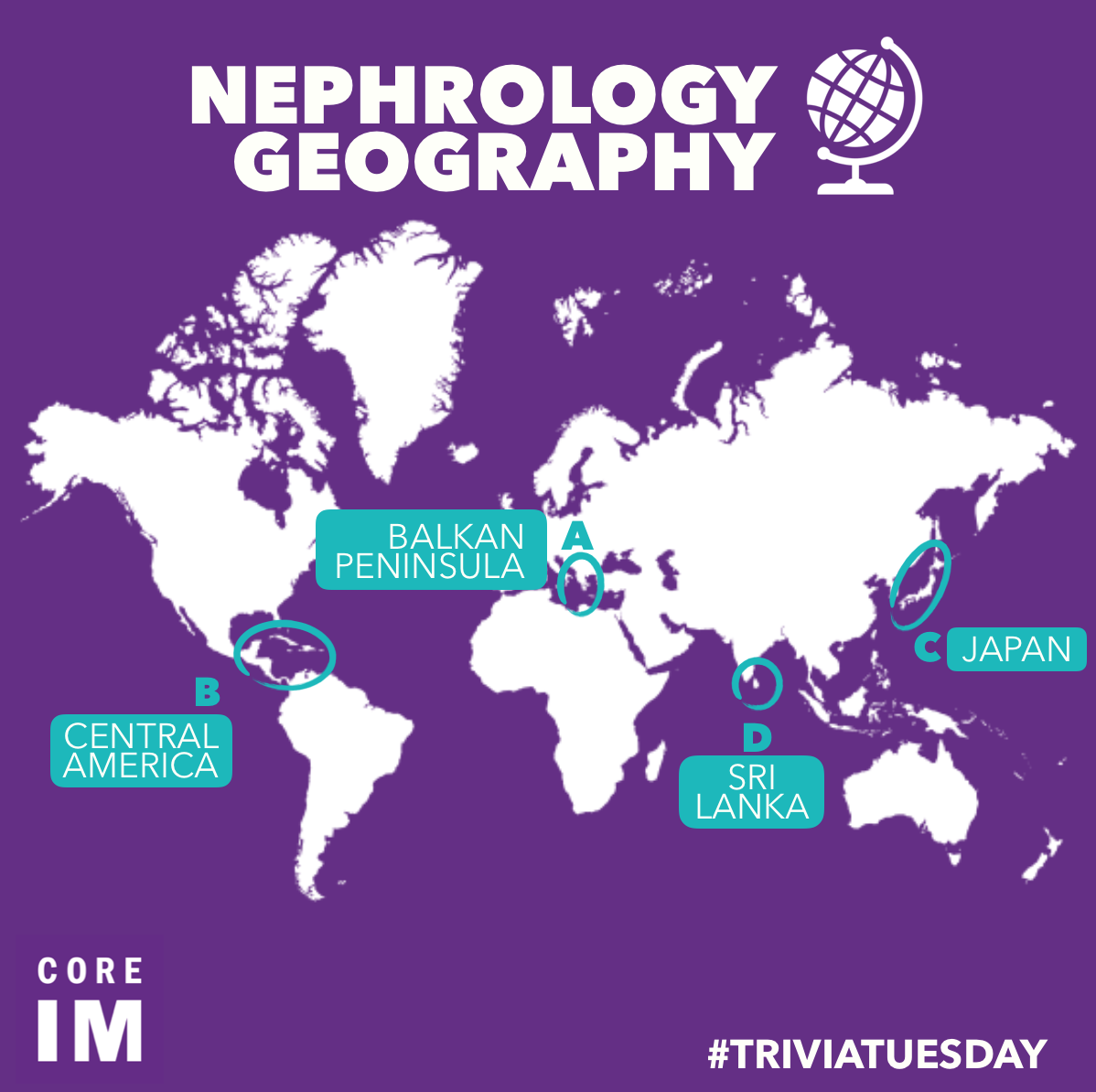 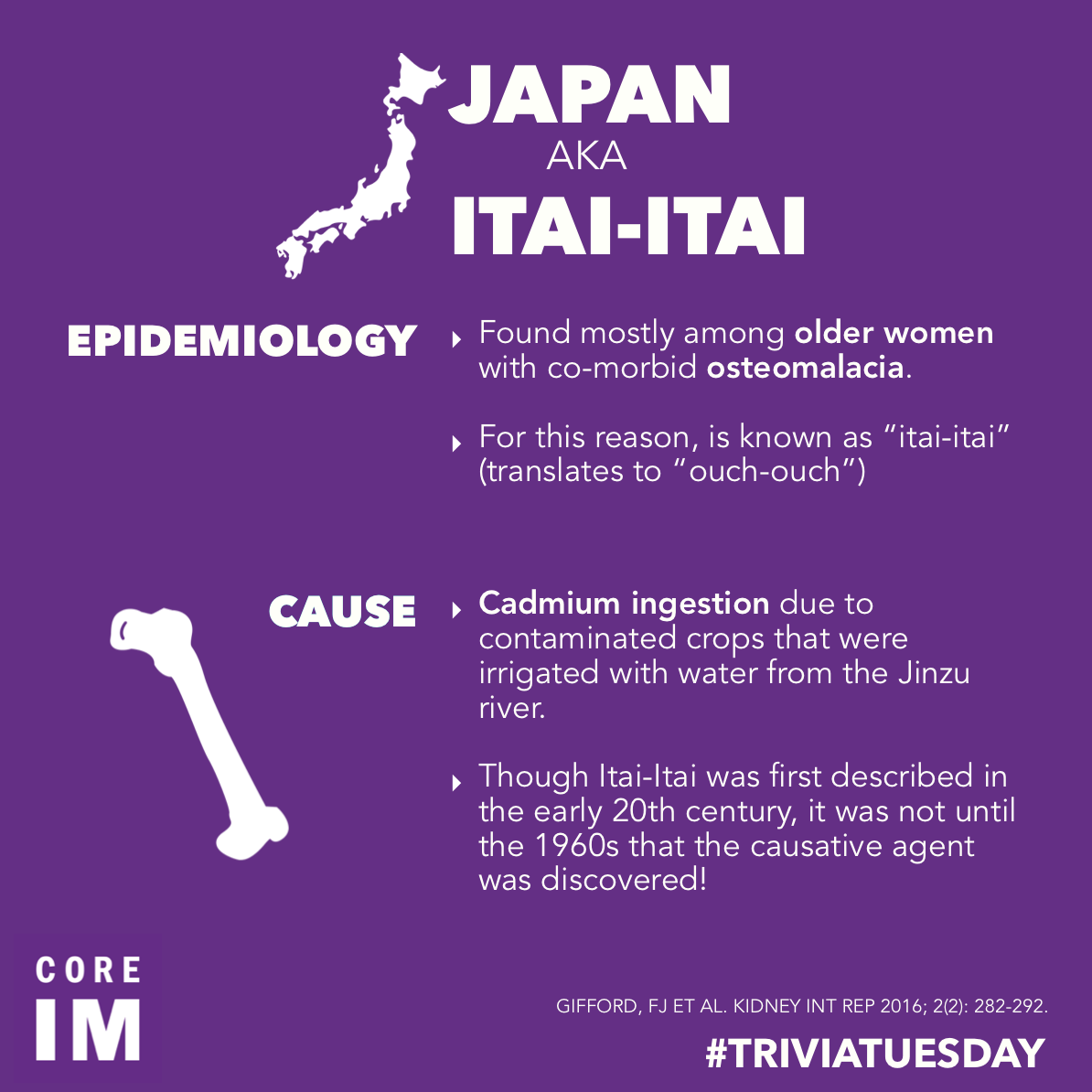 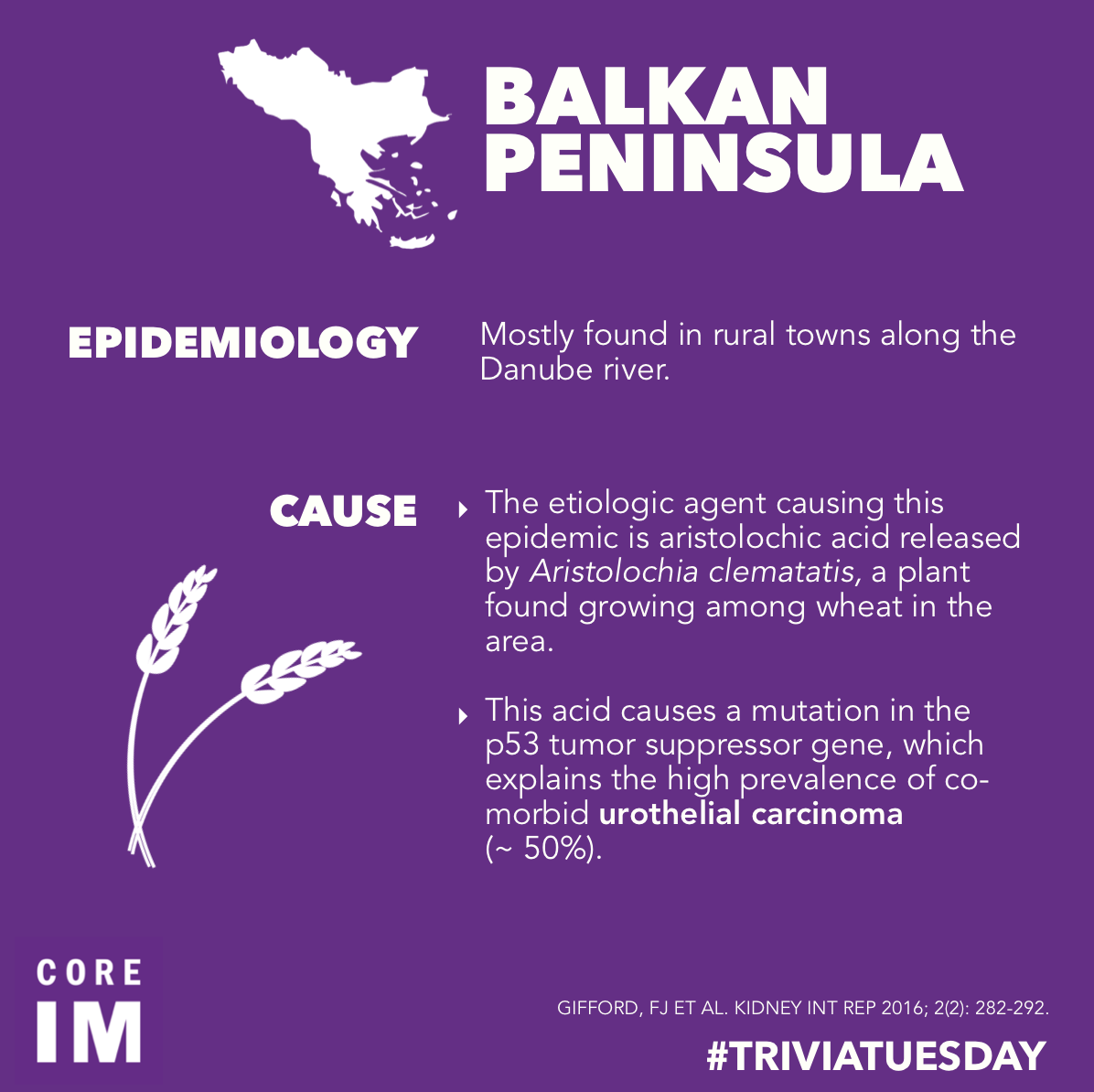 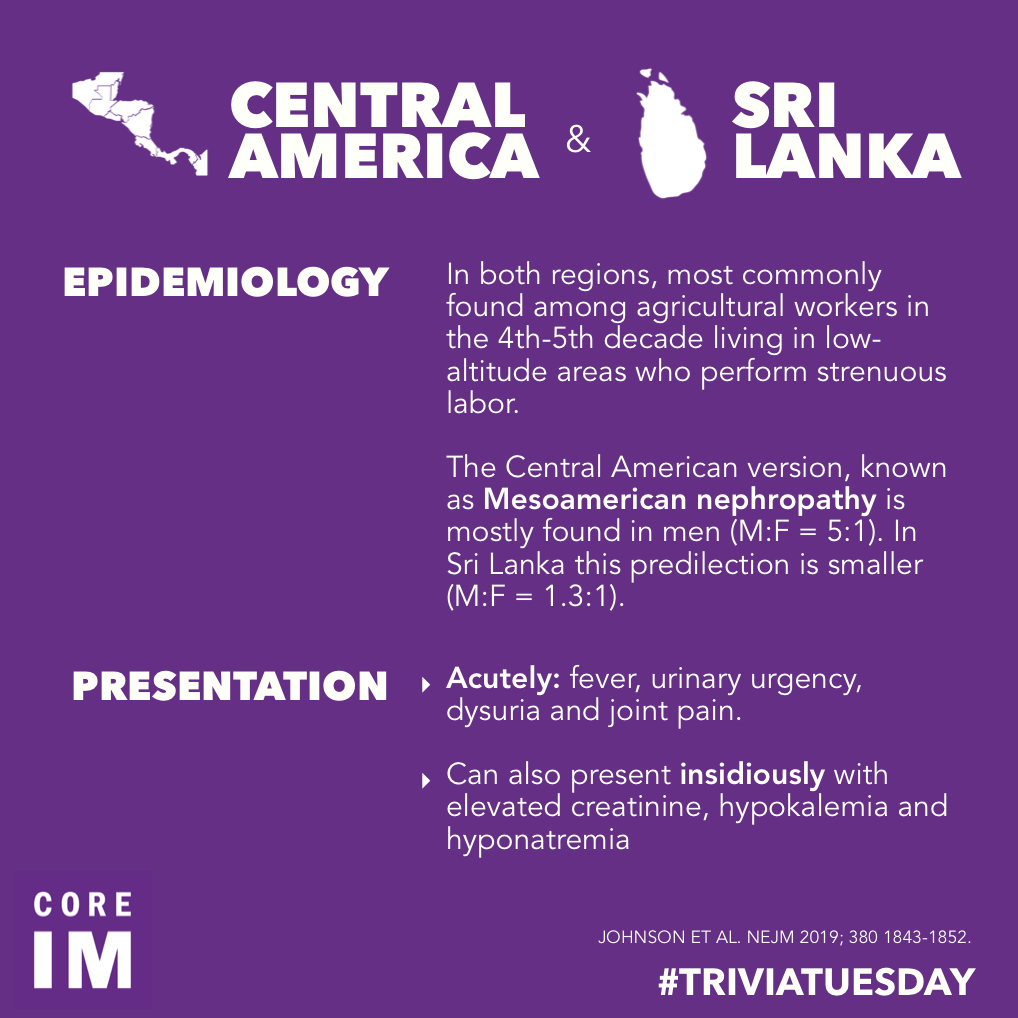 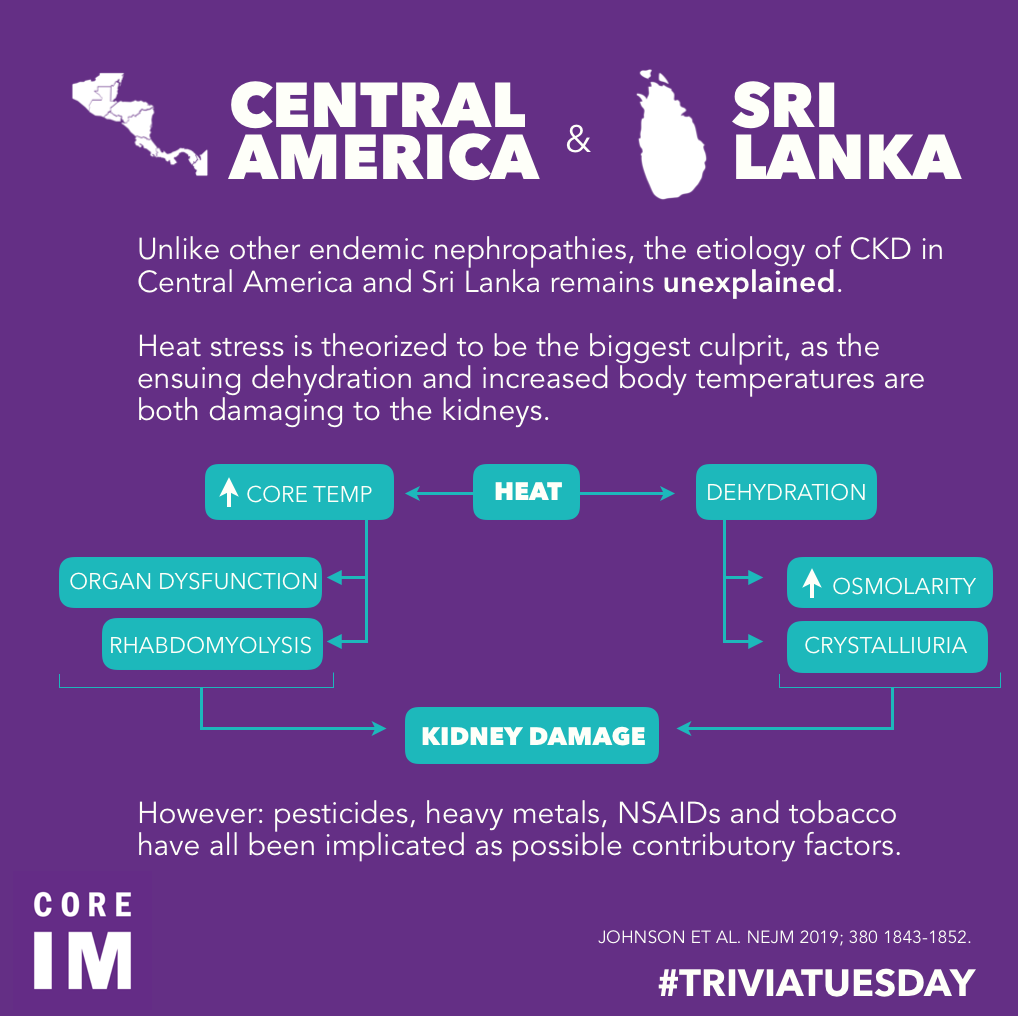 Slide 1: Nephrology Geography. Several regions of the world are disproportionately affected by endemic nephropathies, or rare/unknown etiologies of CKD. Can you name the region that corresponds to each epidemiological vignette? A) Middle-aged adults with comorbid bladder cancer. B) Male agricultural workers with exposure to heat and manual labor. C) Post-menopausal women with bone pain and waddling gait. D) Adults with low back pain who reside in the “dry zone.”

Slide 3: Japan, aka Itai-Itai. Epidemiology: Found mostly among older women with comorbid osteomalacia. For this reason, is known as “itai-itai” (translates to “ouch-ouch”). Cause: Cadmium ingestion due to contaminated crops that were irrigated with water from the Jinzu river. Though Itai-Itai was first described in the early 20th century, it was not until the 1960s that the causative agent was discovered!

Slide 4: Balkan Peninsula. Epidemiology: Mostly found in rural towns along the Danube river. Cause: The etiologic agent causing this epidemic is aristolochic acid released by Aristolochia clematatis, a plant found growing among wheat in the area. This acid causes a mutation in the p53 tumor suppressor gene, which explains the high prevalence of comorbid urothelial carcinoma (~50%).

Slide 6: Central America & Sri Lanka. Unlike other endemic nephropathies, the etiology of CKD in Central America and Sri Lanka remains unexplained. Heat stress is theorized to be the biggest culprit, as the ensuing dehydration and increased body temperatures are both damaging to the kidneys. [diagram of proposed mechanism] However: pesticides, heavy metals, NSAIDs, and tobacco have all been implicated as possible contributory factors.